Actually, this is a place where many people have gone before. After all, there have been something like four or five licensed rpg takes on Star Trek, dozens of Trek-a-likes and hundreds of homebrews. Why bother with this one?

If you spontaneously find yourself humming the fight theme from “Amok Time” when you see people getting into an argument…if you miss the days when special effects were a fistful of glitter in a tank of water, when science fiction on television really did push social boundaries, when rocks were made of foam, consoles were made of explodium, and nobody blinked twice when this week’s episode featured a planet of actual space Nazis…when the pinnacle of awesome involved a shirtless man punching it out with a big rubber lizard to prove a point of morality to alien space gods…then this might be for you.

TL:DR: “Where No Man Has Gone Before” is a high camp, TOS-only RPG based on the Microlite20 ruleset. Lots of random tables, with the design goal of having as short a distance between picking up and playing as humanly possible.

Follow the links below to download pdf’s of this d20 Star Trek rpg set in the time before bumpy-headed Klingons.

If you have any suggestions or feedback from playtesting, don’t be afraid to shoot me an email. 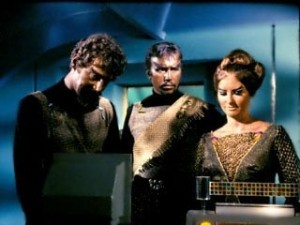 Standard disclaimer: This game is completely free, as in beer. All copyrights are copyright of their respective owners.

Resale or misuse of said downloadable pdf is prohibited except via permission. I disavow all liability for any damages said document may do to you or your computer should you opt to download it, up to and including you printing it out, grinding it into a fine white powder and inadvertently inhaling it.

Feel free to redistribute, use or modify as you see fit as long as you give proper credit to me. If you do anything really cool with it, fire me an email and let me know about it.

Paper Miniatures by Okumarts!
Get them here.
Seriously, they rock.